We are delighted that The Guardian have developed an 18 minute podcast based on their 2017 newspaper article. You can listen to it here. If you have just discovered Fred Spiksley’s amazing story and would like a copy of our book then please subscribe to our newsletter as we are releasing a soft-back update later in the year after the hardback sold-out twice over. We will also keep you updated on the progress of the documentary film where filming should recommence soon.

After Crystal Palace FC have recently staked a claim to be recognised as the World’s Oldest League Club we thought we may take a look into this. Our findings can be viewed for free on this website. The document has been shared with Crystal Palace FC and we encourage it to be shared as widely as possible. Click on the image to be taken to our dedicated webpage. 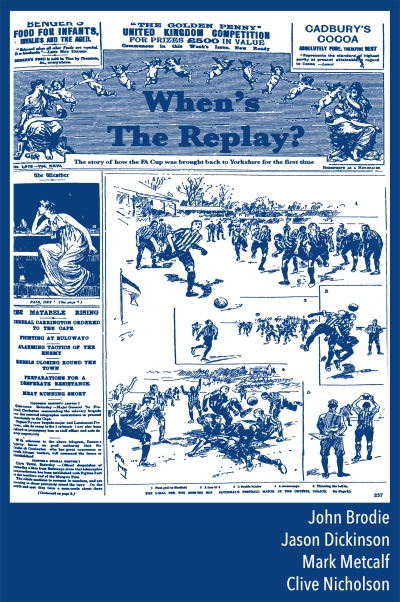 Mark and Clive have teamed up with John Brodie and Jason Dickinson to release a Free Digital book for Sheffield Wednesday fans (and others) to enjoy during the national Covid-19 lockdown. Hopefully introducing some new people to the story and players behind the 1896 FA Cup triumph.

For those that would like a physical copy this is available through Amazon with all profits going to the S6 Foodbank. For free or paid copies of the book click on the image above for further details.

We recently discovered that in November the Spanish podcast Bed and Breakfast, which is about English football, did a feature on Fred Spiksley. This website does receive a good number of Spanish speaking visitors each month so we are delighted that they will be able to listen to Fred’s story in Spanish. The feature lasts almost 10 minutes and can be found by clicking on the Bed and Breakfast logo and listening to the audio from the 50 minute mark.

Recalled books now sold out – Subscribe to newsletter to receive info on soft back release.

As much as we are delighted to say that our book has exceeded all expectations in selling out it is, at this moment in time, obviously now more challenging to spread Fred Spiksley’s wonderful life story.

Our film is about 50% complete and when it is released a new soft back version of Flying Over an Olive Grove will be released. It will have a different name and will include some updates and a different mix of photographs.

Listen to Mark and Clive discuss Fred’s colourful life in this 12 minute feature from 2018.

If you have just discovered Fred’s story on the BBC website then you can view our flier here to see what everyone said about his amazing life and our book. Click Here

BBC Online published a feature on Fred Spiksley on 13 November written by Phil Dawkes. We have since received many requests for how our book can be purchased. The book came out in 2016 and has sold out twice over. It’s amazing to think that a story of a previously forgotten about footballer has sold to thousands of people with only a handful ever being sold on second hand. However, the last 50 copies we have sold off ourselves on eBay. The bbc article sold out all the remaining copies, but after a few phone calls we have called back in 20 books. If you would like to get one then they are available on eBay here. The books are priced at £15 inc. p&p and when they are gone that’s it.

We are currently filming our crowdfunded film; The Dream, A Football Story, which is based on our sold out Fred Spiksley biography; Flying Over An Olive Grove. Like the book the film will tell the story of the birth and development of the beautiful game through the remarkable story of forgotten football legend Fred Spiksley.

For further information on our film and who has backed us please read the following overview: Since our successful kickstarter campaign, which saw football supporters up and down the country backing us, we have spent time assembling a team, writing a two hour script, buying props and recruiting the people who will tell Fred’s Story.

Filming commenced in April where we visited the home of Gainsborough Trinity to film their last match of 2019 against South Shields. We have since filmed at Villa Park, Molineux and across various historical football sites in Lancashire. In the coming weeks we will be filming at various locations with will include; The Georges Park, The National Football Museum, The Scottish Football Museum and various of locations around the city of Sheffield.

The voiceover for the film will be performed by distinguished Merseyside football journalist and radio presenter John Kieth. On screen anchors will be provided by Sheffield football journalist Alan Biggs and up and coming West End Actress Jane Crawshaw (Great Grandaughter of Sheffield Wednesday legend Tommy Crawshaw). Experts and famous footballing faces have also been lined up to help bring Spiksley’s forgotten story back to life.

Our production company is now up and running with The Dream, A Football Story set to be its first major release. Rough Jersey will continue to produce documentary shorts that  bring back to life the history of our national game.

Join our newsletter for updates on the book and additional material.